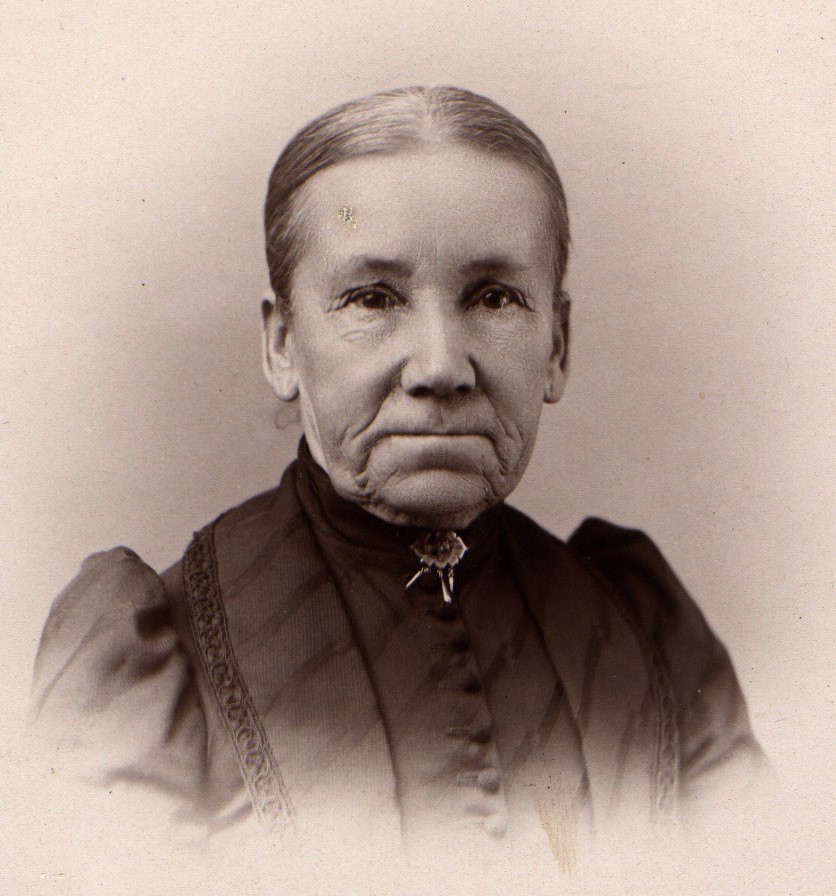 END_OF_DOCUMENT_TOKEN_TO_BE_REPLACED

The story of my 2nd great grandparents, Dennis Holden and Phoebe Clark, of Lawrenceburg, Dearborn County, Indiana, and their children is a tragic one.

Dennis and Phoebe married 1860 in Lawrenceburg, where they lived for a time, their first child being born there. Dennis, a miller, found work at the P. Lamb and Co. Distillery in Lafayette, Tippecanoe County, Indiana, where the next child (and probably the third) was born. By 1870 the family had moved to Sedamsville [now Cincinnati], Hamilton County, Ohio, where Dennis worked for yet another distillery.

“Holden, Mrs. Dennis
“The remains of the wife of Dennis Holden were brought here [Lawrenceburg] for burial on Friday last, from Sedamsville. About nine days before her death, she gave birth to a child and never recovered her health. She leaves a husband and four or five children. [emphasis mine] She was a daughter of Hiram Clark of this place.”

Unable to care for his children, Dennis farmed them out; all but one found far and wide in the 1880 census:

Dennis himself lived in 1880 as a boarder in Mount Jackson, just west of Indianapolis. He worked as a miller, possibly in a local distillery, where other boarders in the household worked. He did not remain there long. In 1882 while working at the distillery in Petersburg, Kentucky, just across the Ohio River from Lawrenceburg, Indiana, Dennis suffered a severe injury to his arm requiring amputation and ultimately causing his death from “lockjaw” [tetanus] on 7 April.

The search for and research of this family is another story. Many lessons learned along the way. To be told some other time…

Week 7 of 52 Ancestors in 52 weeks and behind a couple of weeks but really wanted to post on this topic.

I have so many favorite discoveries but this one takes the serendipity cake!

My second great grandfather, Dennis Holden, was born about 1839 in Ohio. He was the son of Moore Holden but no record proved that relationship. In 1850 and 1860 he lived in Moore’s household in Lawrenceburg, Dearborn County, IN, but the relationship was not stated and those was the only times and records where the two were found together. 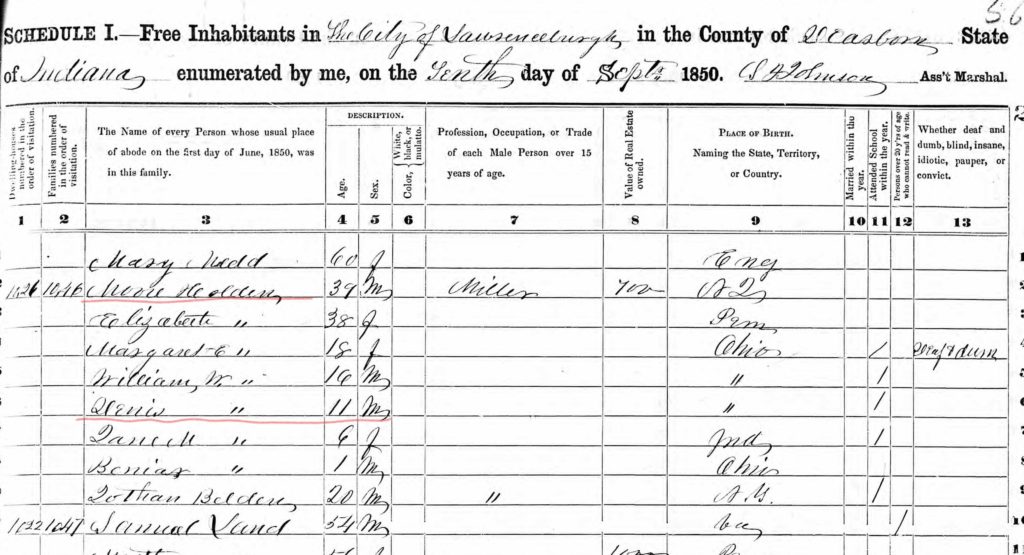 Several years ago while in Lawrenceburg doing brick and mortar research on my Holden ancestors, I learned from the genealogy librarian that the man who performed the 1852 marriage for my 2g grandfather Dennis Holden’s sister Margaret and her husband (Jotham Belden, found in their household in 1850) was the minister of the ME Church across the street from the public library. The church, built in 1847, was still standing. She suggested that I visit its loft where “artifacts” were stored.

I almost didn’t; after all, what could possibly be there? And I had only a day and a half in Lawrenceburg. Luckily, I did call and set up a time to visit.

In the loft, I discovered several ME Church Record Books with entries as early as 1839.

These Church Minutes contained almost no vital records BUT there was an 1844 entry for the baptisms of Margaret Eliza, William Weston and Dennis, “children of Moore Holden.” These were the three oldest children in the 1850 census. 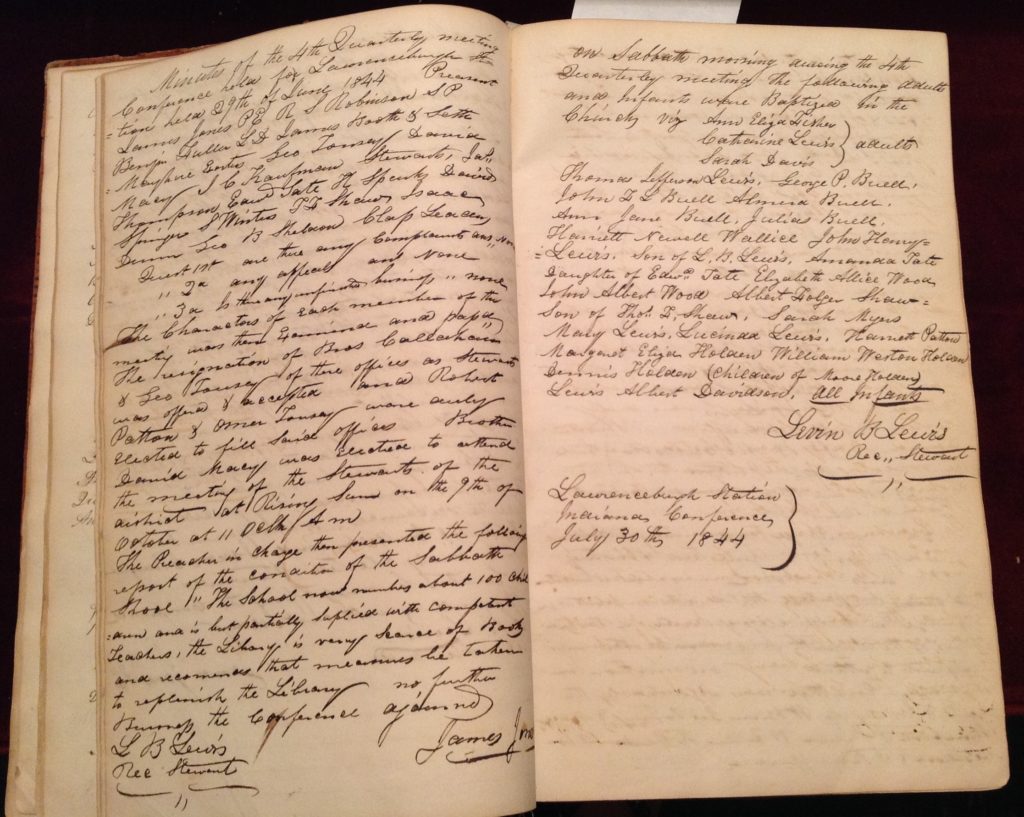 This is the only record that proves kinship between them. There were no land, probate, court or vital records that link the two men.

Also among the treasures was a list of contributors to the church building fund that included Moore Holden. 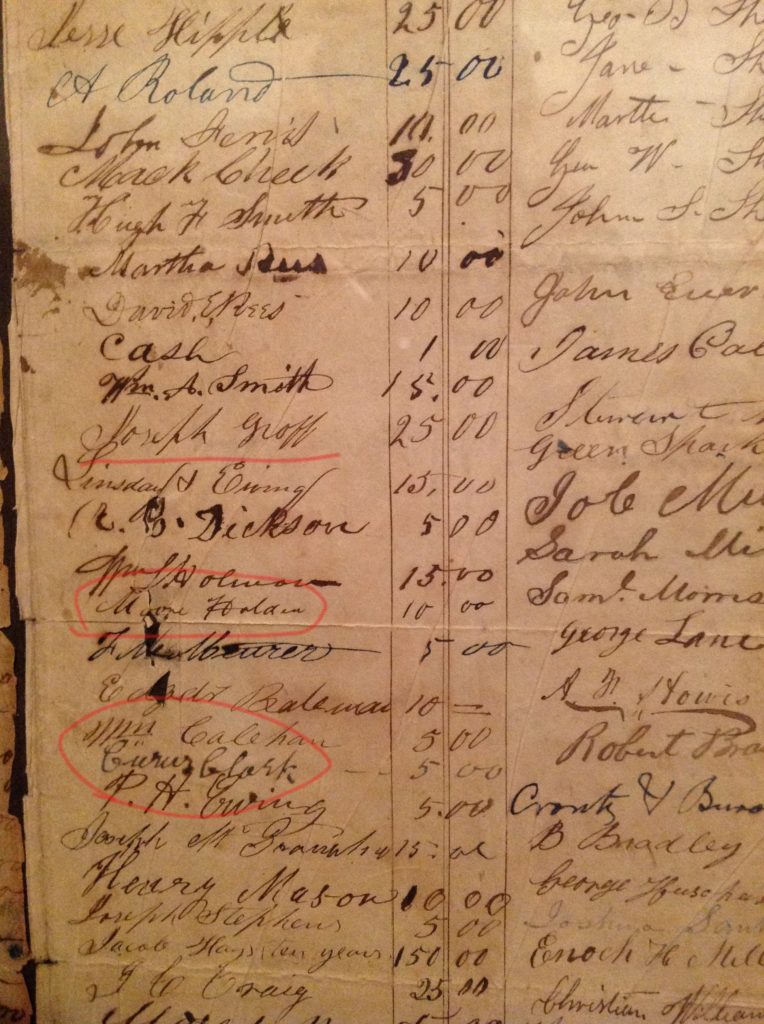 List of persons who pledged money for the building of the ME Church, 2 March 1846, [original manuscript framed under glass], Hamline Chapel, Lawrenceburg, Indiana.

Proving kinship in early records is always a challenge especially when records don’t exist or contain no information. We always hope to find that lost or obscure source and rarely succeed.

This time it happened!

There is so much more to a family than the begats.  Our ancestors lived and breathed and toiled and carved out an existence that defined them.  Why did your great grandfather come to America in 1863?  Why did he settle in Kansas in 1871? My great grandfather, William Frank (Johann Andreas Wilhelm to be exact) left Germany for the United States in 1854.  I don’t know why he left but I do know that he settled first in Marseilles, Ohio, and was a musician in the Civil War, and then homesteaded in Kansas in 1869. I have letters he wrote to his brothers and sisters while in the War and after arriving in Kansas. A person emerges, not a genealogy, not a history, but a real person.  This is what family history is about, this is what we can leave to our children.

Don’t delay, ask all the questions you can think of  of your elders. Gather all the papers, documents, Bibles, quilts, samplers, letters, pictures that you can. Take pictures, record histories. Talk to family members. Preserve your past, once it’s gone, it’s gone – unless you decide to record it for posterity.

I will start by saying that I have been an Ancestry.com subscriber since they began and I think it is a wonderful resource.

BUT, as they say, Buyer Beware!

I am only speaking from experience and not about to point fingers!  I only want to help others from making my mistakes.  There are trees posted on ancestry.com (and elsewhere) that are well documented and are the result of many years labor in providing as accurate information as possible. But it takes practice and discretion to discover those trees or those parts of trees.

I had a genealogy web site on rootsweb.com many years ago. I posted my family tree with the information available at the time. I also posted photographs, notes, biographies and copies of documents.
The next thing I knew, my own images were coming back to me on ancestry.com as those little leaves. Someone had copied my information from my website and posted it to ancestry.com. Then what felt like hundreds of family trees had populated my information. I have tried to follow trails to see if the poster of the tree has any connection at all to me and rarely did I find one. Yet they have pictures of my grandparents and great grandparents. Can I say, “I feel violated?” Some of those images may even be copyright violations! And now sons are husbands and mothers are nieces, etc. Some families have 20-30 children since the merge feature in ancestry requires a little user input and obviously got none.

Okay, back to my original point. A hard-learned lesson, is to document everything from events to family members. What may seem obvious when reading a census from 1850-1870, the children in the household are the children of the head of household, may not be the case. It is not wise to assume. It’s good to have working hypotheses and to continue from there, but verify, verify and verify.
So back to ancestry.com family trees. You do no one, especially not yourself and your family, any favors by assuming what you have found in the trees is correct. In fact, you may increase your burden dramatically by accepting what you have found as fact.

BEFORE you decide to merge any information from another tree into yours, STOP!

And wait, if you think I am being high-handed, I too (or at least my great aunt) was conned. I received a picture of an ancestor in the files my grandmother had. It was printed and published along with a well-documented genealogy report recently. Letters and emails came rolling in. This was a picture of a U.S. President. All those years, my grandmother, great grandmother and great great aunt coveted this photograph and it wasn’t even their ancestor.

I offer a free 30 minute consultation. Please call or email me for questions. It is so much better to start right than to have to backtrack. Been there, done that!

It took almost eighteen years for me to learn this lesson: Taking the time to document all sources you have used at the time you used them, no matter how tedious it may feel, will save you at least triple the time it took to write them down.  In this electronic age and with the accessibility of records on the internet, this is even more true.  It is too easy to get caught up in the search and following leads at breakneck speed to other records and then others and then …  Before you know it, you have twenty or thirty documents and can’t remember where you found them.

You may have seen these before but this is the approach I recommend.

It’s embarassing and disheartening to realize years after the fact, that you don’t know where that obituary, that marriage certificate, that biography came from and have no way to track down the original repository and find the source again much less how to cite it.

As an aside, I remember, when I first started my family research, reading condescending comments made by professional genealogists about the “amateur” and how put off I was by that. Instead of offering well-considered advice, they purposely set themselves apart as “the professionals.” I didn’t know any better at the time and I was enthusiastically adding individuals and information to my tree with complete abandon. I was offended by those “professionals” and therefore did not take the time to listen.

I hope as a professional myself that I will always offer gentle and supportive guidance for those just starting out.  We can all learn something and we can all teach something.